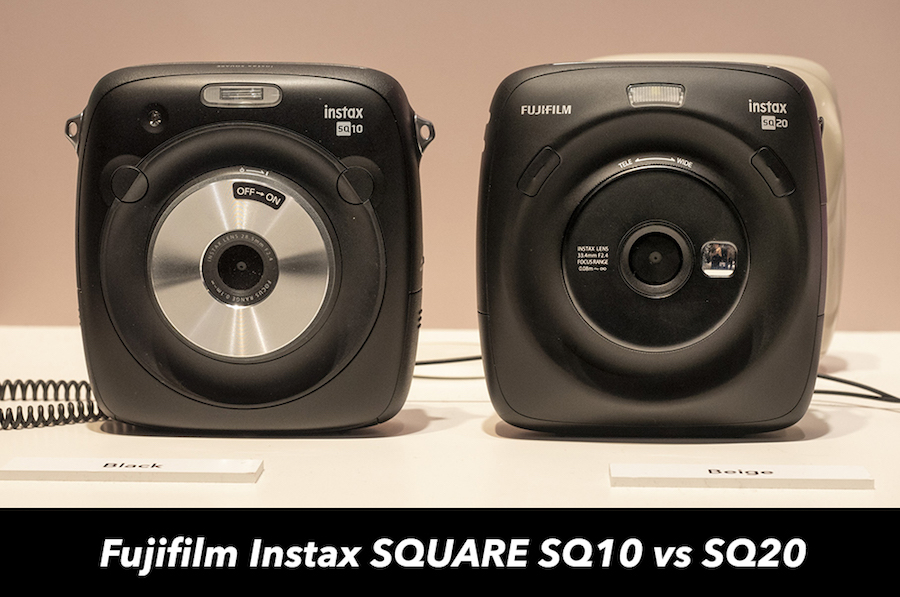 With most instant film cameras, taking a shot is a gamble – after roughly gauging your composition and exposure, you press the shutter button and hope for the best. As you can imagine, this approach can result in a lot of wasted film, especially if you aren’t very experienced!

This is why the Instax SQUARE SQ10 was such a breath of fresh air. It was the very first instant camera equipped with both a digital sensor and printer, making it possible to take pictures and preview them on the rear screen before printing them.

Now, just over a year later, it is joined by its successor, the SQ20, which builds on the strengths of the original model with the addition of a digital zoom, extra image effects and movie-related modes. If you’re curious to know more about all the main differences between the two Instax models, keep on reading – we have all the answers here!

What they have in common:

Ethics statement: All information is based on official specifications, press releases, our hands-on experience with the SQ20 at Photokina 2018 and our long-term experience with the SQ10. All opinions about these two cameras are our own. Within this article, there are affiliate links. If you buy something after clicking the link, we will receive a small commission. To know more about our ethics, you can visit our full disclosure page. Thank you!

Although the two Instax cameras look very similar when placed side by side, there are a few noticeable modifications to the design. 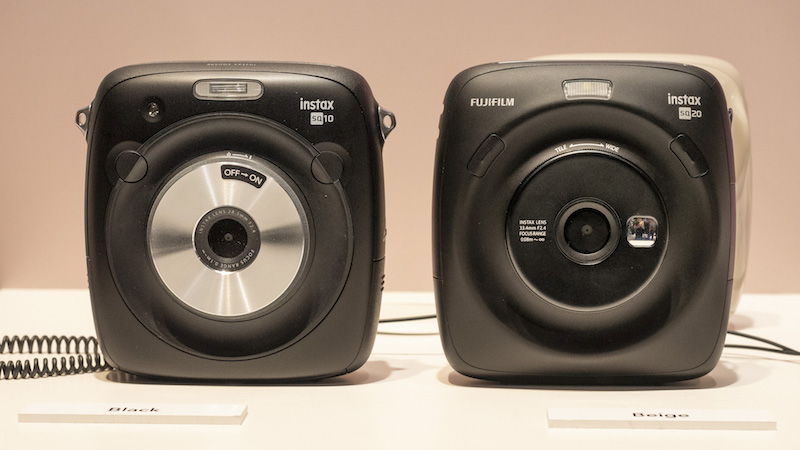 For instance, the lens is now the same colour as the rest of the body, whereas on the SQ10, it was silver in colour.

The twin control buttons on the front have gone from being circular and flush with the body to being rectangular. From each protrudes a raised bump which should help you locate the buttons without looking at the front of the camera.

Also new is the toggle on the rear which can be used to turn the camera on/off and engage the new Motion Mode which we’ll talk about below. 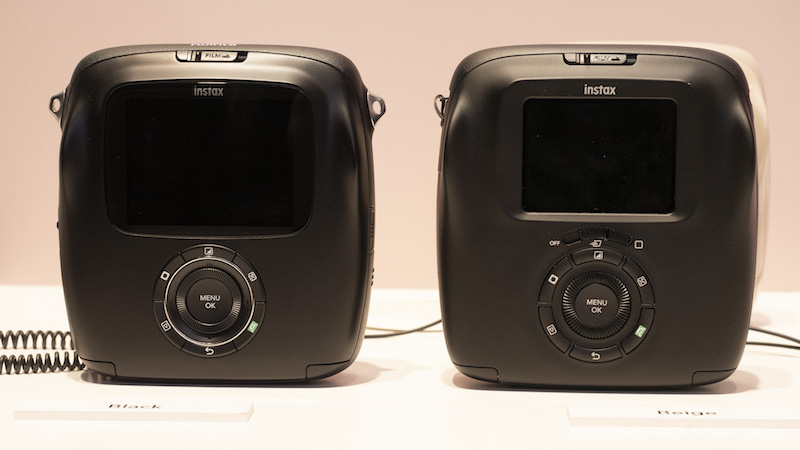 Other small differences include the redesigned strap lugs and the relocation of the USB charging port and Micro SD card slot.

Unlike the SQ10 whose NP-50 battery can be removed and charged separately, the SQ20 has a built-in battery that must be charged via USB. Interestingly, you can also use the USB port to transfer images on the new model. You can take up to 160 shots with the SQ10 or 100 shots with the SQ20 on one charge. 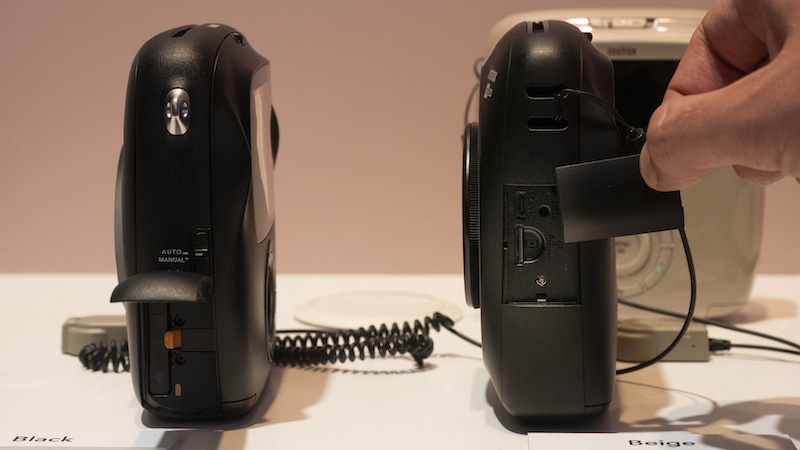 Originally the SQ10 only came in black but a white version was announced later in the year. The SQ20 on the other hand was announced in both matte black and beige from day one. 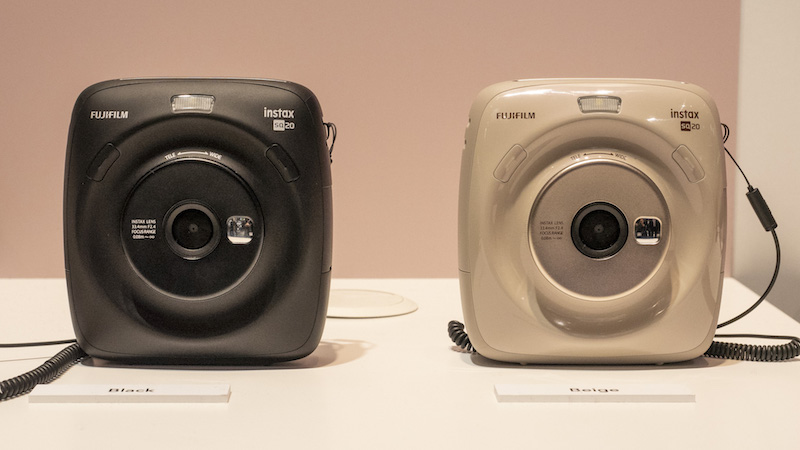 The SQ20 comes in matte black and beige

The two cameras are more or less the same size and weight. You can see the exact measurements below:

The new Motion Mode on the SQ20 allows you to take a video clip up to 15 seconds in length from which you can select the best frame(s) to print. This mode should work really well for spontaneous action shots, such as a dog jumping to catch a frisbee or a skateboarder performing stunts.

Another related option is Motion Mode with Sequence Filter, which lets you combine frames to create a motion blur effect.

Time Shift Collage is a fun mode that combines four sequential images into one shot.

Simply press the shutter button once and the camera will take a burst of four images, all of which will appear on the rear monitor. You can adjust the time difference between frames from 0.2 to 2 seconds. 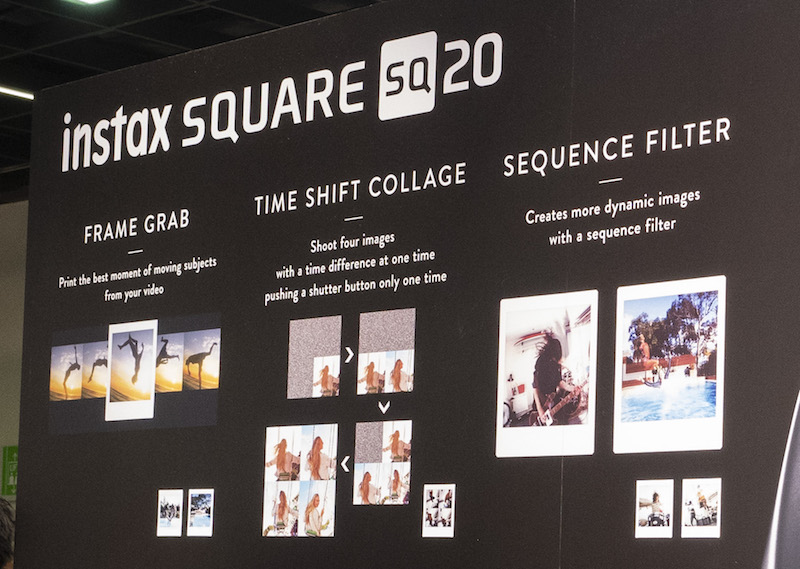 The new Split mode lets you combine multiple images into one shot. There are four segmented options: vertically halved, horizontally divided in three, divided into quarters and divided into nine.

Collage is similar to Split in that you combine images but in this case, you can also divide one image up at random.

Both cameras use a contrast detection based autofocus system and are limited to single autofocus (S-AF) in stills mode.

However switching to movie mode on the SQ20 activates continuous autofocus (C-AF). This is good news because otherwise the camera would struggle to follow moving subjects.

Here we have a small difference that you won’t notice unless you dig deep into the camera specifications.

The SQ20 comes with a wider range of filters for stills and video. In total, it has ten filters for both, two dedicated stills filters, three video filters and six partial colour filters.

The SQ10 is limited to 10 filters plus the six partial colour filters. Below you can see an example of the Partial Red filter which is available on both models. 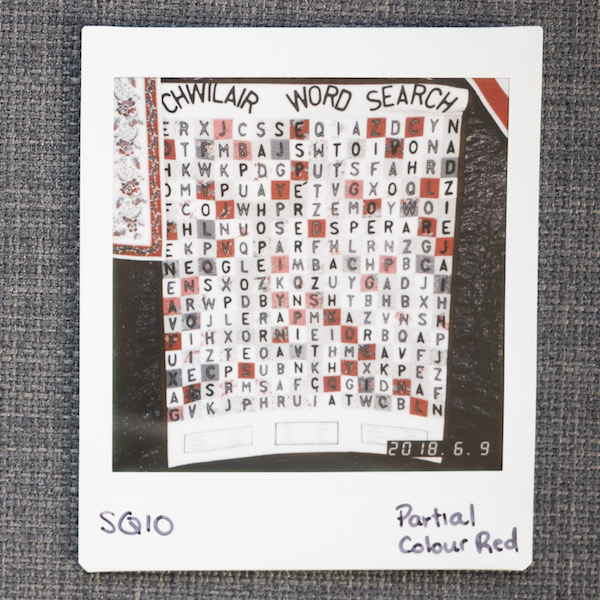 The SQ10 wasn’t given a selfie mirror, which was a strange decision given the target market. Indeed, it’s a feature you’ll find on most Instax cameras including the entry-level models.

The SQ20 has rectified this, so you can now take perfectly composed selfies and group shots without worrying about somebody’s head being cut off!

9. Sensor size and field of view

The SQ20 uses a slightly smaller sensor than the SQ10 (1/4-inch versus 1/5-inch). This results in a narrower field of view on the new camera (33.4mm versus 28.5mm in 35mm format) because the lens is exactly the same on both models.

Whereas with the SQ10 you were limited to the 28.5mm field of view, the SQ20 offers a 4x digital zoom. It becomes the first Instax camera to offer this feature and will give you the chance to be a little more creative with your compositions.

All things considered, the SQ20 appears to be a relatively minor upgrade over the SQ10. So if you already own the older model, we wouldn’t recommend trading it in for the new version unless you are drawn to the new motion/collage features and digital zoom.

If you don’t own the SQ10 however, it definitely makes sense to consider the new model because the current retail price is so similar. Special deals aside, you can usually find the SQ10 for approximately $190 whereas the new model is set to debut in October 2018 with a price tag close to $200.

Check the price of the Instax SQ10 on

Previous Post: « Fujifilm Instax Mini 90 Modes (and how to use them)!
Next Post: The Best Instax Mini Cameras of 2018 »